The health of the Great Barrier Reef (GBR) is declining – a fact that has not been lost on the world’s media.

The issue has made international headlines and attracted comment from public figures such as US President Barack Obama and British businessman Richard Branson.

Some media outlets and tourism operators have sought to downplay the effects, presumably to try to mitigate the impact on tourism. The industry provides roughly 65,000 jobs and contributes more than A$5 billion a year to the Australian economy.

But our research suggests that the ailing health of the GBR has in fact given tourists a new reason to visit, albeit one that doesn’t exactly promise a long-term future.

When we surveyed hundreds of GBR tourists last year, 69% of them said they had opted to visit the reef “before it is gone” – and that was before the latest bleaching generated fresh international headlines about its plight.

“Last chance tourism” (LCT) is a phenomenon whereby tourists choose to visit a destination that is perceived to be in danger, with the express intention of seeing it before it’s gone.

The media obviously play a large role in this phenomenon – the more threatened the public perceives a destination to be, the bigger the market for LCT.

There’s a vicious cycle at play here: tourists travel to see a destination before it disappears, but in so doing they contribute to its demise, either directly through on-site pressures or, in the case of climate-threatened sites such as the GBR, through greenhouse gas emissions. These added pressures increase the vulnerability of the destination and in turn push up the demand for LCT still further.

The GBR often features on lists of tourist destinations to see before they disappear, alongside places such as Glacier National Park, the Maldives and the Galapagos Islands.

While the media have proclaimed the reef to be an LCT destination, it has not previously been empirically confirmed that tourists are indeed motivated to visit specifically because of its vulnerable status.

We wanted to find out how many of the GBR’s holidaymakers are “last chance” tourists. To that end, we surveyed 235 tourists visiting three major tourism hotspots, Port Douglas, Cairns and Airlie Beach, to identify their leading motivations for visiting.

We gave them a suggested list of 15 reasons, including “to see the reef before it is gone”; “to rest and relax”; “to discover new places and things”, and others. We then asked them to rate the importance of each reason on a five-point scale, from “not at all” to “extremely”.

We found that 69% of tourists were either “very” or “extremely” motivated to see the reef before it was gone. This reason attracted the highest proportion of “extremely” responses (37.9%) of any of the 15 reasons.

This reason was also ranked the fourth-highest by average score on the five-point scale. The top three motivations by average score were: “to discover new places and things”; “to rest and relax; and “to get away from the demands of everyday life”.

Our results also confirmed that the media have played a large role in shaping tourists’ perceptions of the GBR. The internet was the most used information source (68.9% of people) and television the third (54.4%), with word of mouth coming in second (57%).

Our findings suggest that the GBR’s tribulations could offer a short-term tourism boost, as visitors flock to see this threatened natural wonder. But, in the long term, the increased tourism might exacerbate the pressure on this already vulnerable region – potentially even hastening the collapse of this ecosystem and the tourism industry that relies on its health.

This paradox is deepened further when we consider that many of the tourists in our survey who said they were visiting the reef to “see it before it is gone” nevertheless had low levels of concern about their own impacts on the region.

Where to from here?

We undertook our survey in 2015, before this year’s bleaching event, described as the most severe in the GBR’s history.

This raises another question: is there a threshold beyond which the GBR is seen as “too far gone” to visit? If so, might future more frequent or severe bleaching episodes take us past that threshold?

As the most important source of information for tourists visiting the GBR, the media in particular need to acknowledge their own important role in informing the public. Media outlets need to portray the reef’s current status as accurately as possible. The media’s power and influence also afford them a great opportunity to help advocate for the GBR’s protection.

Of course, tourism is just one element in a complex web of issues that affect the GBR and needs to be part of a wider consideration of the reef’s future.

The only thing that is certain is that more needs to be done to ensure this critical ecosystem can survive, so that tourists who think this is the last chance to see it can hopefully be proved wrong.

It was a much later start in the day for me today, departing Woomera at about 7.15am. Being as ill as I was with the flu, I felt I could use the sleep-in. Once I was on my way, it was just off to Pimba for a quick fuel pit stop – Pimba is only a very short distance up the road and took only a matter of minutes to get there. This also marked the beginning of the more expensive fuel prices, with ULP coming in at $1.60 a litre at Pimba. It would be $2.02 at Kings Canyon Resort. 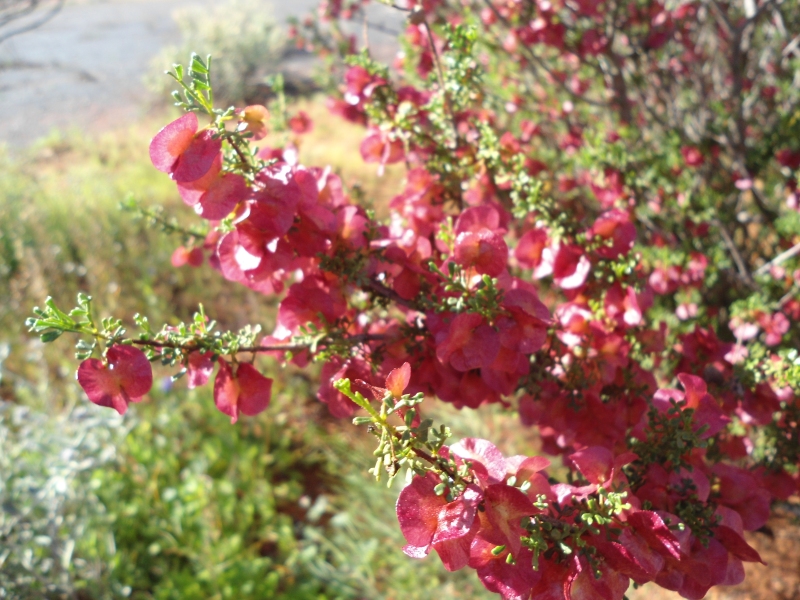 Once on the road proper, I again searched for a number of geocaches along the way. These helped to highlight the land that I was travelling through and allowed for regular leg stretching, which always helps when on the road for long periods of time. Another thing that helped to break up the day were the wildflowers, with a number of short breaks taken throughout the journey to take in the spectacle at close quarters. The wildflowers were really something that struck me during my holiday travels. They were really something throughout central Australia.

Coober Pedy was my first major stop as I headed north towards Marla and as I drew closer to the Opal town I visited two monuments along the Stuart Highway – a monument marking the discovery of opal at Coober Pedy and another the explorer John MacDouall Stuart.

ABOVE: The John MacDouall Stuart Monument Near Coober Pedy

Coober Pedy has never really appealed to me and once again I found myself wanting to get my business in the town settled and to be on my way again. There was a fuel stop and some grocery shopping in the local IGA, knowing that prices would become much higher the further inland I headed. The prices in the shop at Kings Canyon Resort took my breath away, and I for one believed it was little more than price gouging given that there was nowhere else to go. But Kings Canyon was still several days away and so that shock was still to come.

ABOVE: Welcome to Coober Pedy

From Coober Pedy it was a pretty straight-forward run to Marla and my first night in the tent at Marla Traveller’s Rest. It was quite a cold night and with the flu I wasn’t really looking forward to it. However, my car-based camping set-up allows me a very comfortable and warm sleeping environment, so there were no real dramas. It was however a very cold night when out of the sleeping bag and out from under the covers. It was probably close to zero.

The distance travelled on this day was 599 km – giving me a total of 2369 km for the whole trip to this point.

Once again it was the usual ‘house keeping’ before bed – updating the daily journal, reviewing the holiday budget, checking in on social media, and editing and uploading photos. Then it was off to bed for an early start the next morning, with the excitement mounting, as I would arrive in Yulara the next day and be within sight of Uluru – the main goal of my holiday.

View the Photos at:
https://flic.kr/s/aHskFFWHSE