Twenty-six of the forty-six fish species known to live in the Murray-Darling basin are listed as rare or threatened. Recent fish kills in the iconic river system are a grim reminder of how quickly things can take a turn for the worst.

A sudden drop in population size can push a species towards extinction, but there may be hope for resurrection. Frozen zoos store genetic material from endangered species and are preparing to make new individuals if an extinction occurs.


Unfortunately, poor response to freezing has hindered the introduction of fish into frozen zoos in the past. Now new techniques may provide them safe passage.

A frozen zoo, also known as a biobank or cryobank, stores cryopreserved or “frozen” cells from endangered species. The primary purpose of a frozen zoo is to provide a backup of endangered life on Earth allowing us to restore extinct species.

Reproductive cells, such as sperm, oocytes (eggs) and embryos, are cooled to -196ºC, at which point all cellular function is paused. When a sample is needed, the cells are warmed and used in breeding programs to produce new individuals, or to study their DNA to determine genetic relationships with other species.

There are several cryobanking facilities in Australia, including the Australian Frozen Zoo (where I work), the CryoDiversity Bank and the Ian Potter Australian Wildlife Biobank, as well as private collections. These cryobanks safeguard some of Australia’s most unique wildlife including the greater bilby, the golden bandicoot, and the yellow-footed rock wallaby as well as other exotic species such as the black rhino and orangutans.

Internationally, frozen zoos are working together to build a “Noah’s Ark” of frozen tissue. The Frozen Ark project, established in 2004 at the University of Nottingham, now consists of over 5,000 species housed in 22 facilities across the globe.

As more and more species move into frozen zoos, fish are at risk of being left out. Despite years of research, no long-term survival has been reported in fish eggs or embryos after cryopreservation. However, precursors of sperm and eggs known as gonial cells found in the developing embryo or the ovary or testis of adult fish have been preserved successfully in several species including brown trout, rainbow trout, tench and goby.

By freezing these precursory cells, we now have a viable method of storing fish genetics but, unlike eggs and sperm, the cells are not mature and cannot be used to produce offspring in this form.

To transform the cells into sperm and eggs, they are transplanted into a surrogate fish. Donor cells are injected into the surrogate where they follow instructions from surrounding cells which tell them where to go and when and how to make sperm or eggs.

Once the surrogate is sexually mature they can mate and produce offspring that are direct decedents of the endangered species the donor cells were originally collected from. In a way, we are hijacking the reproductive biology of the surrogate species. By selecting surrogates that are prolific breeders we can essentially “mass produce” sperm and eggs from an endangered species, potentially producing more offspring than it would have been able to within its own lifetime.

Cell surrogacy has been successful in sturgeon, rainbow trout and zebrafish.

The combination of cryopreservation and surrogacy in conservation is promising but has only successfully been used in one endangered species so far, the Manchurian trout.

The “store now, save later” strategy of frozen zoos sounds simple but alas it is not. The methods needed to reproduce many species from frozen tissue are still being developed and may take years to perfect. The cost of maintaining frozen collections and developing methods of resurrection could divert funding from preventative conservation efforts.

Even if de-extinction is possible, there could be problems. The Australian landscape is evolving – temperatures fluctuate, habitats change, new predators and diseases are being introduced. Extinction is a consequence of failing to adapt to these changes. Reintroducing a species into the same hostile environment that lead to its demise may be a fool’s errand. How can we ensure reintroduced animals will thrive in an environment they may no longer be suited for?

Reducing human impact on the natural environment and actively protecting threatened species will be far easier than trying to resurrect them once they are gone. In the case of the Murray Darling Basin, reversing the damage done and developing policies that ensure its long-term protection will take time that endangered species may not have.

Read more:
I’ve always wondered: does anyone my age have any chance of living for centuries?


Frozen zoos are an insurance policy, and we don’t want to have to use them. But if we fail in our fight against extinction, we will be glad we made the investment in frozen zoos when we had the chance.

The introduced fungal infection ‘Myrtle Rust’ has spread from gardens and nurseries into the Dharug National Park. The Mill Creek Camping Area has been temporarily closed in consequence of the spread, with National Park and Wildlife Service staff carrying our control measures during the closure in an attempt to prevent any further spread of the disease.

Climate change activists under the ‘Rising Tide’ banner conducted what was called on the day the ‘People’s Protest’ in Newcastle yesterday. The protest was an attempt to shut down the Port of Newcastle in Australia, which is the largest exporter of coal in the world.

Despite the protesters claim that they had successfully blockaded the harbour, the authorities had previously arranged for there to be no shipping movements on the day in the interests of safety. The protesters used kayaks and various home-made ‘boats’ to form the blockade near Horseshoe Beach. About 500 people took part in the protest.

A police presence was very active during the protest to ensure safety and to prevent any form of crime.

Rising Tide is preaching a message of anti-coal and pro-renewable energy for our future.

The protesters block the harbour entrance

The police maintained an active presence 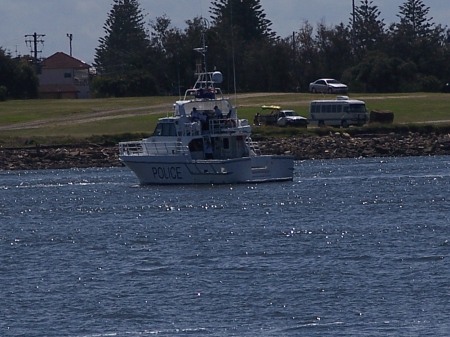 The police maintained an active presence